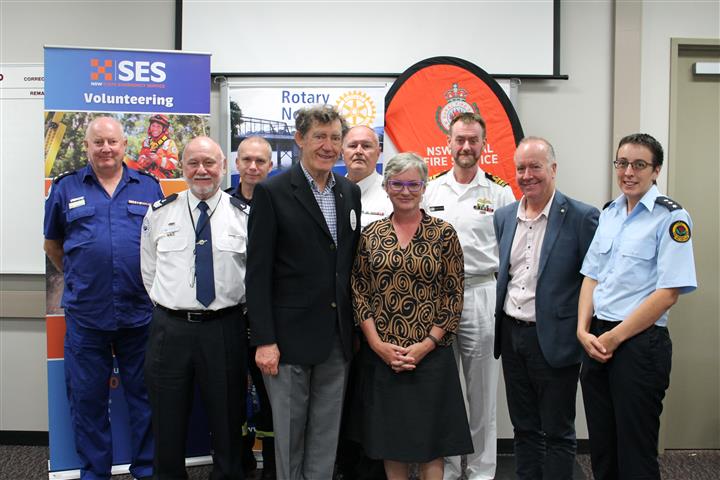 Mayor of Shoalhaven and Patron - Amanda Findley, representatives of Shoalhaven Rotary Clubs and local Emergency Service organisations launch the Shoalhaven Emergency Awards on 4 April 2019. These awards will now become an Annual Event that will feed into the NSW State and National awards.

In keeping with Rotary’s motto of “Service Above Self”, the Awards acknowledge community service of NSW Police and Emergency Services personnel in the Shoalhaven; with profits, if any, applied to:

These Awards are open to all Shoalhaven-based personnel, both paid and volunteer, from the NSW Police and Emergency Service Agencies in the Shoalhaven:

While the NSW Police have a separate Rotary award, they will become a part of this scheme in the Shoalhaven, with the winner going into the State Police Rotary Award.

This is the first year that the Awards have been organised in the Shoalhaven local government area, the category winners of which will automatically go forward as nominees for the respective State Awards.

We are very honoured to have the Mayor of the Shoalhaven as Patron of the Awards and Dr Peter Taylor as the project’s official Ambassador.  Peter is a past winner at State level for Marine Rescue NSW.

In this inaugural year, we are pleased to have:

Our supporters are Nowra Printing Company and Bomaderry Bowling Club.

The SESCA management team sincerely thanks all of these organisations for partnering with us to bring about the fruition of the program.

NSW Police 'Unsworn' of the Year

These Awards are also supported by: