Behind the Badge - Bruce Whiley

Bruce is very familiar with Rotary as his late father, a most respected Doctor, Obstetrician and Gynaecologist in and around Cowra was also a Rotarian’. Bruce, who used a slide show to enhance his talk, was born in Cowra in the 60’s and lived and grew up with his three older sisters in a beautiful, restored home called “Paradise”. The home is an historic icon in the region dating back to the convict days.  Bruce is extremely proud of his dad who started out as a plasterer and tiler before studying medicine for many years in Australia and England whilst raising a family and renovating Paradise.

Bruce’s mother was, very much into the arts, and hosted many musicals, piano concertos etc. It wasn’t until Bruce grew up that he realised how much impact that his parents had in the community. This was reflected when two religions joined their resources together to accommodate the 800 mourners that came to his dad’s funeral.

One of the play areas, Bruce recalled as child, was the nearby Japanese war camp before it became the well-known tourist attraction it is today.

It became apparent when Bruce talked about his adult life that multi skilling is a Whiley family trait. When he left school, Bruce joined the air force as a mechanic and recalled the first aircraft that he worked on for 9 years as being the Hercules and 707 at Richmond air base. He said that, as the 707 required 3 mechanics to fly with it on every trip, he visited many parts of the world in this time and had a great social life.

Bruce also met his wife Peita who was 16 at the time and worked in the local Pharmacy, later becoming a pharmacy manager and management consultant. They were married in 1983. With no children in their early married life they both enjoyed travelling and scuba diving together and still do.

With Bruce and Peita moving around with the RAAF they realised that it was not a lifestyle conducive to raising a family. Bruce left the RAAF and they moved to Orange where they took up farming at a family property in Millthorpe. However, they got off to a rocky start when the wool price plummeted, and interest rates skyrocketed to 22%. Compounding this was that in their first year they produced 1200 fat lambs that sold for, a gut wrenching, $15 each. With the farm going backwards they diversified and started a grape growing venture. They did this in parallel with their other farming enterprises for the next 10 years that proved to be their saving grace. Then the government of the day decided to give grants to anyone to grow grapes and created a massive over supply of grapes. One year they were getting $1800/ton for grapes and the very next year, after the government initiative, they received no money for their crop. This financial shock saw them stay in the grape growing business for a few more years and move into the wine making business producing their own label. However, competing against the large vineyard and wine producing companies became increasingly hard and they eventually got out of the business. By this point Bruce and Peita had children, all girls, and Bruce recalled that they had a great time growing up on the farm that gave them good work ethic foundation for life.

Parallel to farming Bruce worked for three aeronautical companies in the region as part time mechanic. When they got out of the farming industry, they decided to start their own aircraft maintenance company called “Orange Aero Engineering” building state of the art facility at the airport. Unfortunately, whilst the had a great business up and running their building was on Council owned land and over time, this became a problem that saw them sell their business to Council

Bruce had also developed a side business of buying planes from insurance companies in America, dismantling them, shipping them back to Australia and rebuilding them at his workshops. He recalled one interesting adventure on one of these buying trips. Bruce, his foreman and one of his customers, who owned an 18-seater plane, flew it for 33 hours from Adelaide to a Phoenix in Arizona USA. They loaded the plane up with temporary, inflatable fuel tanks for the trip. With a basic $800 GPS system and some Dutch courage they took off for the USA. They knew they were still on track when they landed in Hawaii for a couple of days R and R

After their farming and aviation enterprises Bruce and Peita, as empty nesters, decided to have a sea change for a new chapter in their lives and last year bought a house in Woollamia and moved to the Shoalhaven to enjoy scuba diving in and around Jarvis Bay and be closer to the many friends they have in the Shoalhaven.

Bruce brings a lot of Rotary experience to Rotary Nowra as he is the immediate past President of RC Orange North and an Assistant Governor in the New Rotary District 9705, that will be established when Districts 9700 and 9710 merge in the July this year.

As an employment gap filler Bruce has a part time job, in the marine industry, and currently studying Marine Science to add to his many other skills and qualifications.

Following Bruce’s talk Peita was asked to fill in any gaps in Bruce’s story. Peita spoke about her life’s highlights, her very accomplished children, grand Child and the other family adventures that gave their audience a complete picture of the Whiley family lives to date. 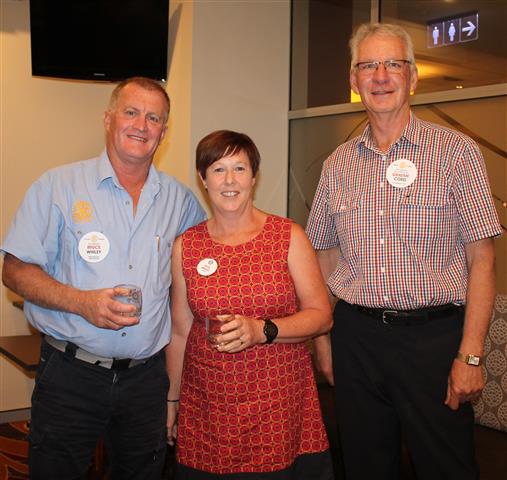 President Graeme, thanks Bruce and Peita, on behalf of membersand guests, for their most interesting and captivating talk