In his introduction, Arthur Moorhouse said that he met Chris, his wife and family a few years ago when they moved to Illaroo Rd. Arthur quickly bonded with Chris when started talking about the history of HMAS Albatross that started its operations as a small airfield in 1935, the same year that the Rotary Club of Nowra was chartered.

Chris, who was born and raised in Luton England, enlisted in Her Majesty's Forces (UK) in 1985 as a boy soldier apprentice in the Royal Corp of Signals, one of the first combat support arms of the British army that go into action,.

Chris gave a brief summary of his career development in the UK where he grew up in a very tough, inhospitable neighbourhood in Luton near London; and joining the army at the age of 16 was a life changing, for the better, transition from an undisciplined social and pier group environment to a very much disciplined one.

His first posting as an 18-year-old was to the 5th Airborne (Parachute) Brigade that was initiated by Winston Churchill in 1940 to contribute to the World War 2 combat effort. In those early days he said that jumping out of perfectly good aeroplane and parachuting into the coalface of conflict was very risky and took a lot of courage and was not for the faint hearted. However, over the years technology, safety and training has greatly reduced the risk and fear of parachuting for both men and women. 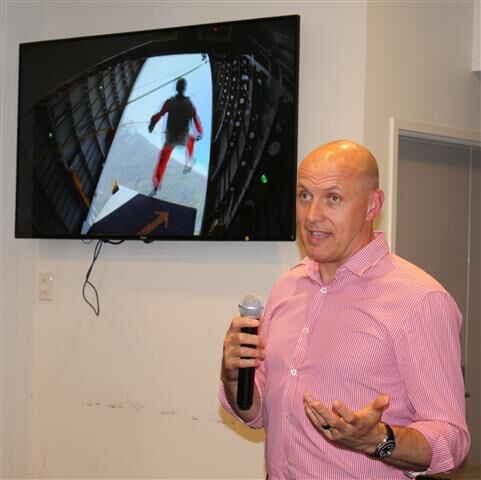 During his talk, Chris showed 'helmet-cam' videos both from inside and outside of the plane of the many parachute drops he has been involved in. Night jumps are more risky than daytime jumps; however, his Chris’s dad joke was that all jumps he made were night jumps to him in his early days because he had his eyes closed.

In his 20’s, Chris had four tours, as a Lance Corporal, parachuting into the jungles of Belize (in the past British Honduras) in Central America, to assist the American authorities combating drug trafficking in the region. As a young man these were exciting and adrenalin pumping times for Chris. The Falklands War was his next combat assignment before he moved into Instruction and training at many facilities for the next 15 years. Chris then came back to the Airborne brigade as a Regimental Sergeant Major. This was at the time when the conflict in Pakistan and Afghanistan blew up, and he has now been on four tours to Afghanistan.

From the ranks he was commissioned and promoted to Captain. Having now required a unique set of skills and experience Chris applied for and, after being intensely interviewed by the Australian Department of Foreign Affairs and Trade (DFAT), was successful in obtaining a transfer to the Australian Defence Force in 2010.

His first posting was to Darwin which was a chalk and cheese experience from England, in regard to weather. The irony was that one of the reasons he requested transfer was to reduce his personal Afghanistan involvement; and eight months later he was back there with the Australian Army.

Chris gave a brief history of how army parachuting developed in Australia until it was relocated to HMAS Albatross in 1986. In 2003 a new, and all-encompassing, Special Operations Command was formed linking Army, Airforce and Navy was formed and became fully operational by 2008.

Chris has further been promoted to the rank of Major since being in Australia and was transferred to HMAS Albatross two years ago.

(Majors are officers who command a sub-unit – a company, squadron or battery - of up to 120 officers and soldiers with responsibility for their training, welfare and administration as well as the management of their equipment.)

HMAS Albatross is now being developed into a major Australian Defence facility and is here to stay. As such Chris and his counterparts at the base very much want to be involved and participate in Shoalhaven community activity. 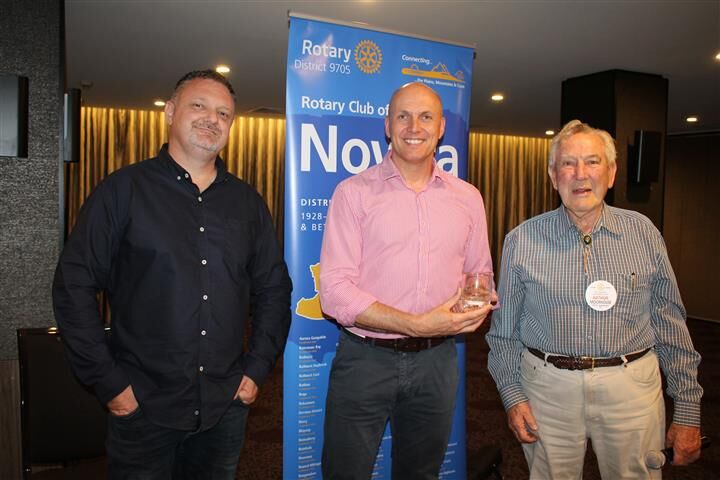 President Jason and Vocational Services Director, Arthur M present Chris with a momento for his talk