At the members and guests meeting, President Jason introduced Michael with a summary of his very impressive University teaching career, his chairing of a number of health networks, and his esteemed political career. Michael’s many achievements saw him being awarded a member of “The Order of Australia” in 2017.

Michael started his presentation by gazumping Arthur Moorhouse, claiming that Rotary Founder Paul Harris visited his Canberra Rotary Club just prior to visiting our club in 1935. This revelation was met with good-natured banter from Nowra Rotarians.

This led Michael into spending a few minutes talking about the Rotary Foundation and the honour of being awarded a Paul Harris Fellow (PHF) himself. He added that whilst he is a Paul Harris fellow his wife Helen has been awarded two PHF’s (Sapphire Pin) over the years for her contributions to Rotary and humanity. The foundation is Rotary’s charity and for every Paul Harris award made $1,000 is made by the awardee to the Foundation. These contributions along with Centurion contributions corporate donations etc. has seen the Rotary Foundation being rated at the highest most effective humanitarian charity in the world for the last the 12 years running.

The primary reason for this is that Rotary is volunteer organisation with negligible overheads and all money raised by the foundation is used for humanitarian projects and programs around the globe and because multiple Rotary Clubs and administrations in different countries participate in Foundation grant projects accountability is so high that opportunity for corruption and misuse of money is virtually eliminated. 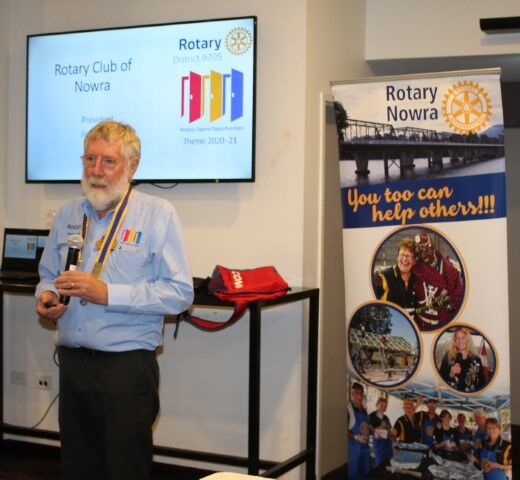 Michael then acknowledge Rotary Nowra’s programs and projects over the past 12 months including our Youth Exchange Student, who has just returned from Denmark, SESCA, Safe Shelter gardens and tinned food drive, Polio Plus fundraising, Centurion program.

Whilst he is the first District 9705 Governor Michael gave tribute to Past District Governors Steve Hill and George Western for their tremendous leadership and lead up work to the merger of Districts 9700 and 9710 to form District 9705 and making it one of the most successful District Mergers in the world.

Michael looked towards Helen to confirm some of his facts and figures respectively referring to her affectionately as GOD, his Governors Official Driver.

Speaking at length about the Peace Bell program for towns and Schools in the District, a story in its self, Michael said that Rotary has initiated many other Projects and Programs including Youth Exchange, the Safe Driving Program, Shelter Box, Clean Water and Sanitation projects in poor communities around the world, International Education programs and Children’s Emergency Medical programs.

Up until June last year Rotary had 6 areas of focus,Peace Building & Conflict Resolution, Basic Education & Literacy, Disease Prevention & Treatment, Water Sanitation & Hygiene, Community Economic Development, Maternal and Child Health  however, given the increased focus on the environment, over recent years, RI has now separated out from the other focus areas to become the 7th area of focus, Supporting Environment. 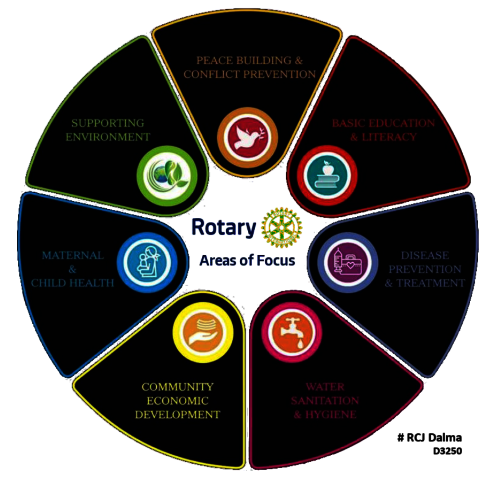 RI is encouraging all Clubs to stay focused on riding the planet of Polio. In December last year there was only 138 new cases in the world 82 in Pakistan and 56 in Afghanistan. One of the main problems in these two Countries is that the less educated men think that the vaccine makes them infertile. However, the women are slowly challenging the myth and getting their children vaccinated.

Rotarians ask a number questions relating to Rotary’s assistance with Covid 19 pandemic  and the humanitarian crisis following the recent coup d'état in Myanmar then President Jason presented Michael with a memento of his visit and Kerry presented Helen with a $250 cheque for her Rotary Charity the “Children’s emergency medical fund”. 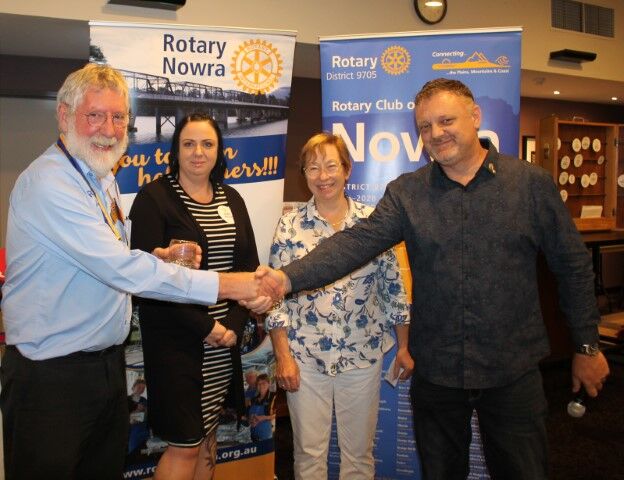 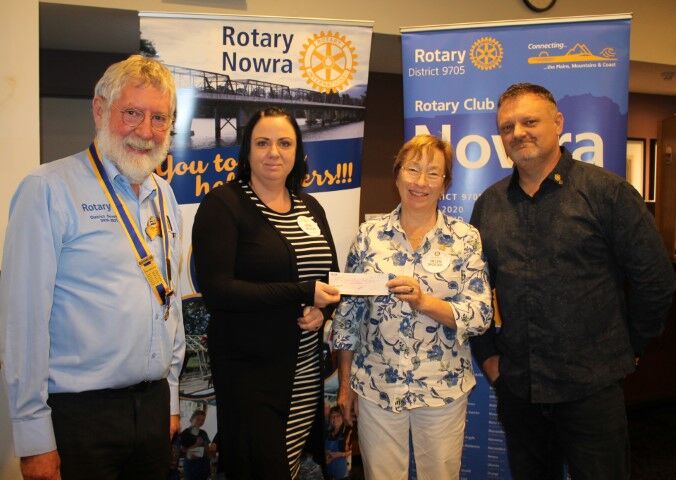