Clive outlined his background saying that he was born in Junction St. Nowra in the early 50’s.  After starting his schooling at the Bomaderry Primary School, he moved to Tumut when his father left the Navy to complete his schooling there and in Wagga.

After school and teacher’s college, Clive became a Primary School teacher and took up postings in the Western Suburbs of Sydney, the Riverina and the Central West. The last 14 years of his 40 years in teaching were spent as the Nowra Public School as its principal.

Acknowledging Bill Thompson, who had joined us for the evening, Clive said that when you become a teacher, you are expected to become a lifelong learner and he was no exception. Over 32 years of continuous learning in his 40 years of school teaching, Clive gained his Graduate Diploma, Bachelor of Economics, Master’s in Education and other post graduate qualifications at three different universities.

When he retired, Clive was about to settle into a life of relaxation however his wife, who was still working, had other ideas and suggested he do something more with those years of education behind him. Clive was elected as a Shoalhaven City Councillor in Ward 2 and spent the next four years in the political arena. Whist he said that he thoroughly enjoyed the community work, he didn’t enjoy the environment of politics for politics sake. After his 4-year term, Clive saw an advertisement for a Program Coordinator, with "The Smith Family", to work with schools. As he had both skill sets, that he had developed over the years, he applied and was successful in obtaining the position and has been with the Smith Family for the past 2 years.

Clive who is a former Rotarian himself, told us how “The Smith Family” was formed, a story reminiscent of how Rotary started. As a young teacher, in Parramatta, Clive used to have a social drink with workmates at the "Woolpack Hotel" on a Friday night and heard the story there.

In 1921 five men, who were patrons of the hotel, decided that work was good that year and that they should share their good fortune with those less fortunate. They decided to buy some Christmas presents for the children in the nearby children’s home. When they presented the boot load of presents to the Head Nun, she said that she would get the Children to send a letter of thanks and ask them for an address. They guys wanted to remain anonymous so they said "Just send the letter to Mr. Smith and his family". That’s how the Smith Family was born as it enters its centenary year.

Clive said that they are now much more than a present giving organisation. For many years The Smith family was a traditional type charity supporting disadvantaged families. They still do this however, around 1990 they reassessed their support and decided to establish programs to break the generational cycle of poverty. Children who grow up in families where the parents don’t work are more prone not to join the work force themselves.

Currently there is 1.2 million children living in poverty and as a consequence are disadvantaged educational wise. The Smith Family has become focused on developing "Learning for Life" programs for disadvantaged children, more research and data collection to measure the success of their programs.

At this stage of their new assistance model the Smith Family support around 50,000 school children in Australia, financially a couple of times a year and provide a person who can work with their family with respect to overcoming issues and obstacles preventing their children going to school and successfully gaining their education through to year twelve.

Clive’s role is to develop and provide programs to schools, in our local area, that are designed specifically to improve attendance, literacy, numeracy, staying at school until Year 12 and career options. Clive runs programs for preschool teachers who are skilled to work with parents of children from 0 to 4 years old to show them how to teach their children to read at home, even if the parents can’t read themselves.

Clive runs similar programs for 8 to 13 year-olds, as well as entrepreneurial skills programs for 11 and 12-year-olds teaching children how to budget, plan expenditure, market etc. then actually do it similar to the “Young Achievers” Program that Rotary conducts. Clive also conducts programs in High Schools to prepare and condition teenagers for apprenticeships, TAFE, university education life etc. after school including visits to these institutions.

Clive then explained the vigorous accountability processes that ensure that the money being spent on a student is producing progressive outcomes and not being wasted or misused. He also described how families can be referred on to other more specialised services if families reach crisis levels.

These Smith Family “Learning for Life programs” are continuously improving from year to year. The average school attendance in 2018 for participating students was Primary Schools – 90.7%, Secondary Schools – 85.2%, Aboriginal and Torres Strait Islander Students 86.3%.

Clive said that many of their students have low self-esteem and he runs out of school programs that gives them confidence and a feeling of belonging that translates into them wanting to go to school and learn.

The Smith Family is delivering a unique solution to long term disadvantaged. Their programs are in every state and territory with outcomes measured and tracked over time.

Supporting children to participate in education helps prevent a lifetime of poverty. The parents they work with are strongly engaged with this approach. By investing in a child’s education, they are breaking the cycle of disadvantage. And by believing in them, they are helping them to believe in themselves. 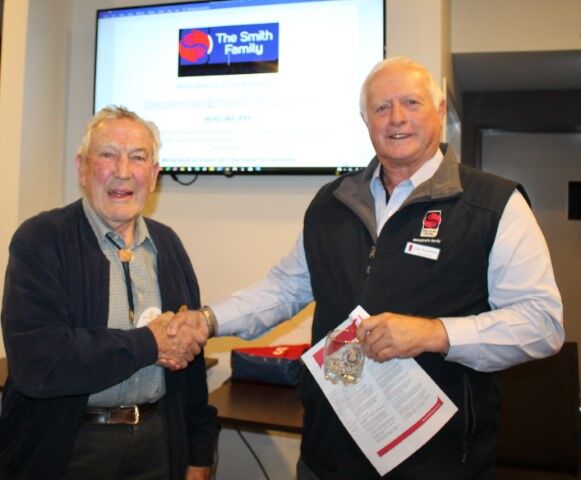 Clive thanked Rotary Nowra for their $500 donation for the purchase of two reconditioned laptops. After thanking Clive for his talk, Arthur Moorhouse presented him with two more laptops that he personally was no longer using. Arthur thanked Mark Wilson for clearing the old data and programs from the laptops.

This means that four more students will now have an essential tool, in this day and age, for their school work and 'Learning for Life' Programs.